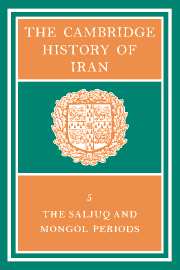 Volume 5. The Saljuq and Mongol Periods