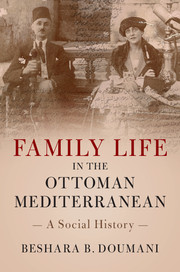 Family Life in the Ottoman Mediterranean
A Social History

An Interview with Beshara Doumani