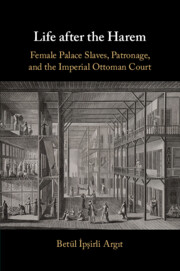 Life after the Harem
Female Palace Slaves, Patronage and the Imperial Ottoman Court