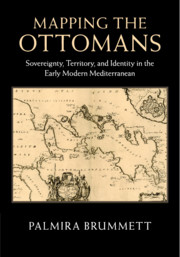 Mapping the Ottomans
Sovereignty, Territory, and Identity in the Early Modern Mediterranean