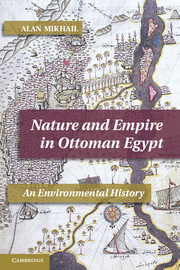 Nature and Empire in Ottoman Egypt
An Environmental History