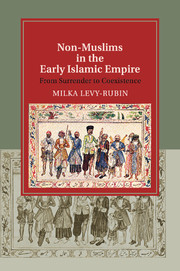 Non-Muslims in the Early Islamic Empire
From Surrender to Coexistence