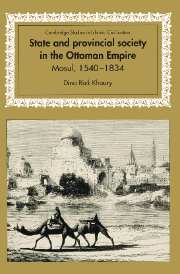 State and Provincial Society in the Ottoman Empire
Mosul, 1540–1834