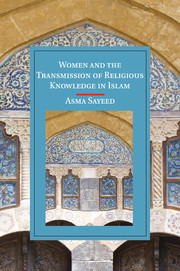 Women and the Transmission of Religious Knowledge in Islam