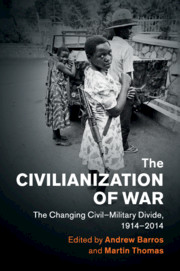 The Civilianization of War
The Changing Civil–Military Divide, 1914–2014