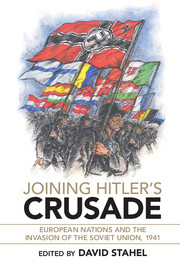 Joining Hitler's Crusade
European Nations and the Invasion of the Soviet Union, 1941