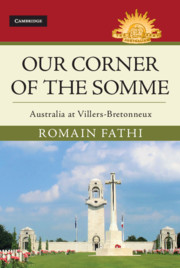 Our Corner of the Somme
Australia at Villers-Bretonneux