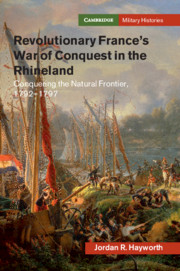 Revolutionary France's War of Conquest in the Rhineland
Conquering the Natural Frontier, 1792-1797