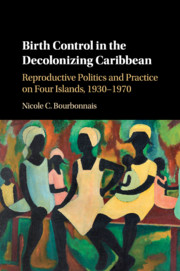 Birth Control in the Decolonizing Caribbean
Reproductive Politics and Practice on Four Islands, 1930–1970