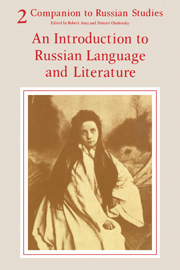 Volume 2. An Introduction to Russian Language and Literature