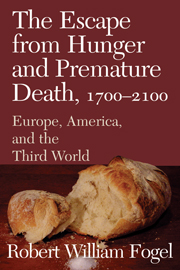 The Escape from Hunger and Premature Death, 1700–2100
Europe, America, and the Third World