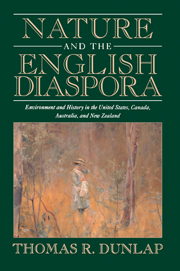 Nature and the English Diaspora
Environment and History in the United States, Canada, Australia, and New Zealand