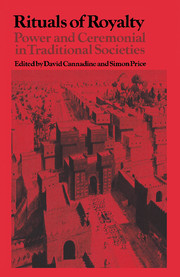 Rituals of Royalty
Power and Ceremonial in Traditional Societies