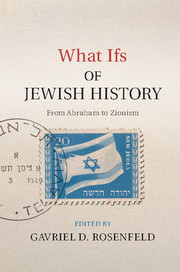 What Ifs of Jewish History
From Abraham to Zionism