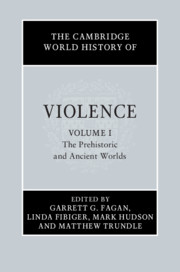 The Cambridge World History of Violence

Volume 1. The Prehistoric and Ancient Worlds

Part of The Cambridge World History of Violence