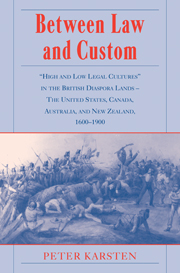 Between Law and Custom
'High' and 'Low' Legal Cultures in the Lands of the British Diaspora - The United States, Canada, Australia, and New Zealand, 1600–1900