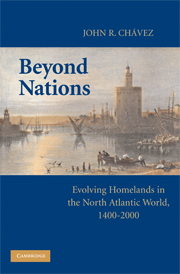 Beyond Nations
Evolving Homelands in the North Atlantic World, 1400–2000