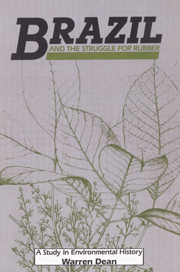 Brazil and the Struggle for Rubber
A Study in Environmental History