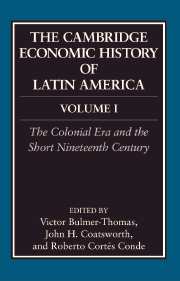 Volume 1. The Colonial Era and the Short Nineteenth Century