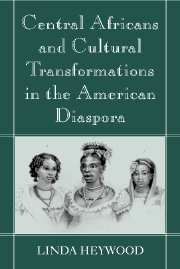 Central Africans and Cultural Transformations in the American Diaspora