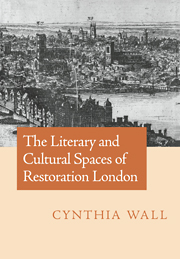 The Literary and Cultural Spaces of Restoration London