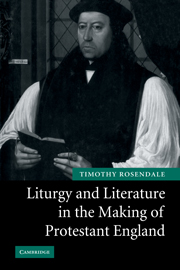 Liturgy and Literature in the Making of Protestant England