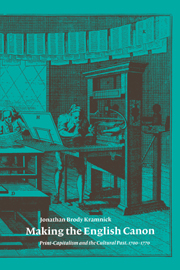 Making the English Canon
Print-Capitalism and the Cultural Past, 1700–1770