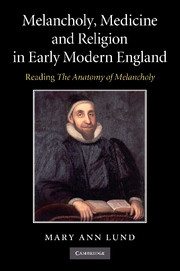 Melancholy, Medicine and Religion in Early Modern England
Reading 'The Anatomy of Melancholy'