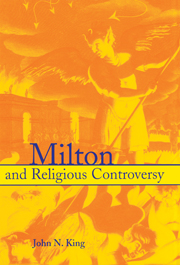 Milton and Religious Controversy
Satire and Polemic in Paradise Lost