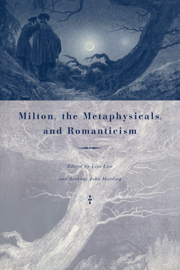 Milton, the Metaphysicals, and Romanticism