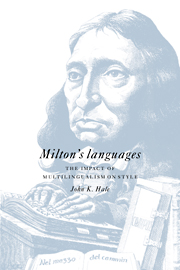 Milton's Languages
The Impact of Multilingualism on Style