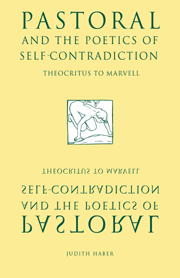 Pastoral and the Poetics of Self-Contradiction
Theocritus to Marvell