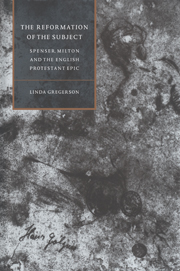 The Reformation of the Subject
Spenser, Milton, and the English Protestant Epic