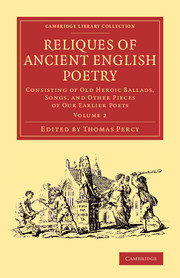 Reliques of Ancient English Poetry
Consisting of Old Heroic Ballads, Songs, and Other Pieces of our Earlier Poets