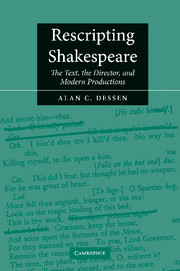 Rescripting Shakespeare
The Text, the Director, and Modern Productions