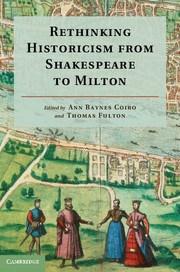 Rethinking Historicism from Shakespeare to Milton