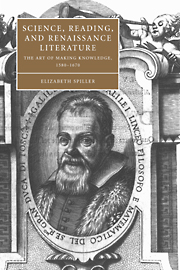 Science, Reading, and Renaissance Literature
The Art of Making Knowledge, 1580–1670