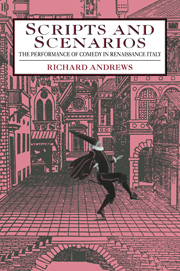 Scripts and Scenarios
The Performance of Comedy in Renaissance Italy