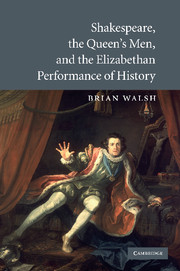 Shakespeare, the Queen's Men, and the Elizabethan Performance of History