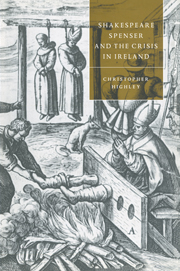 Shakespeare, Spenser, and the Crisis in Ireland