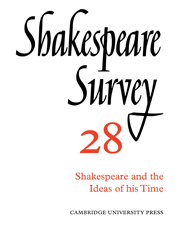 Volume 28. Shakespeare and the Ideas of His Time