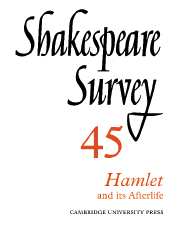 Volume 45. Hamlet and its Afterlife