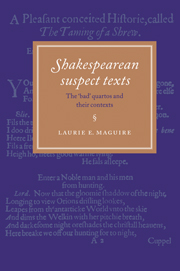 Shakespearean Suspect Texts
The 'Bad' Quartos and their Contexts