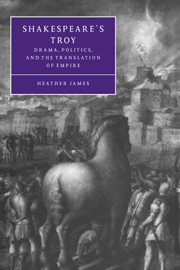 Shakespeare's Troy
Drama, Politics, and the Translation of Empire