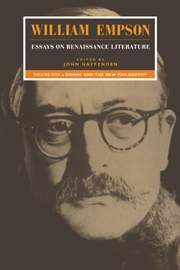 Volume 1. Donne and the New Philosophy