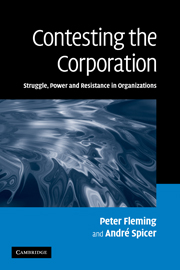 Contesting the Corporation
Struggle, Power and Resistance in Organizations