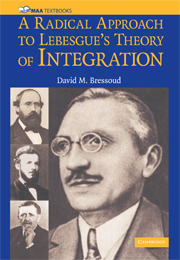 A Radical Approach to Lebesgue's Theory of Integration