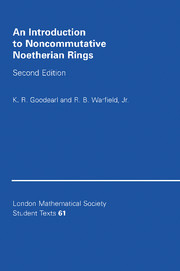 An Introduction to Noncommutative Noetherian Rings