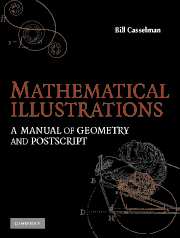 Mathematical Illustrations
A Manual of Geometry and PostScript