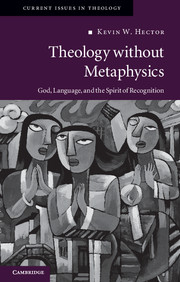 Theology without Metaphysics
God, Language, and the Spirit of Recognition

Part of Current Issues in Theology